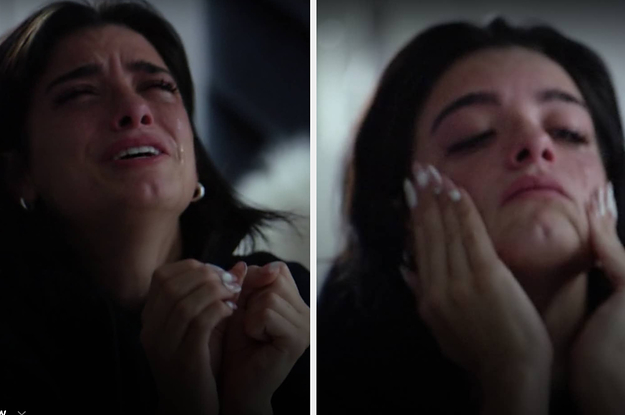 This week, Hulu dropped The D’Amelio Show, a self-explanatory series about the mega-viral TikTok-famous D’Amelio family.

For those that don’t know, Charli D’Amelio has over 123 million TikTok followers, and Dixie has over 54 million. And their parents each have about 10 million followers, too!

The docuseries features the good and bad behind-the-scenes of their daily lives — the bad being the massive amount of criticism and hate Charli and Dixie get online.

One scene displayed some of the negative comments Dixie receives online, and then showed Dixie reacting to the hate.

“[The hate] makes me feel like I don’t deserve anything,” Dixie said, crying, surrounded by her parents. “I’m trying to do everything I can to better myself, and it just gets worse. They break up every single thing I do and make it a negative thing.”

Dixie also brought up how her appearance has been criticized. “I literally got back from the gym, and then they posted a video of just that 15-second clip, and they’re like, ‘Oh my god, she’s so musty.’ I’m like, ‘Shut the fuck up!'”

“Everyone picks apart every single thing I say and do and the way I look. I know it’s just people’s opinions, but it hurts so much.”

“Everyone else can show emotion or talk about things, and everyone supports them. But any time I talk about literal shit I’ve been through, it doesn’t matter. It turns into a joke, and it’s so not.”

Dixie’s father, Marc, later explained why he decided to include the footage. “I wasn’t going to put my daughter in that position, unless she 100% wanted to be. She said yes. That’s why we have cameras on us — because the main goal of ours is to tell a true story of us.”

Reminder that online hate/harassment is never, NEVER OK. You can now watch the full season of The D’Amelio Show on Hulu.

If you’d like to learn more about depression or need mental health resources, you can check out the National Institute of Mental Health.