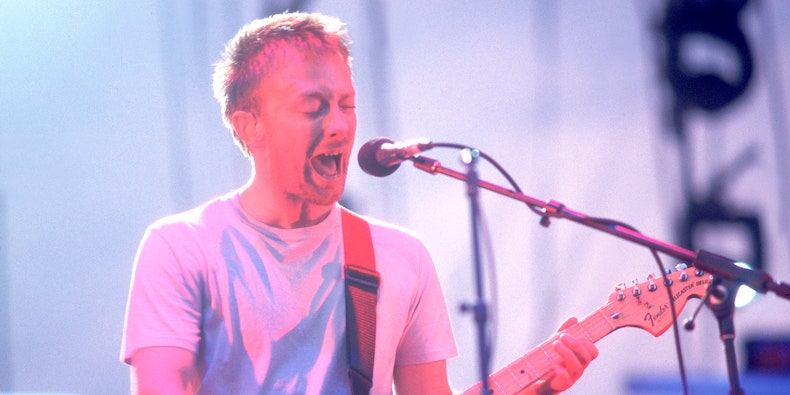 Radiohead’s iconic albums Kid A and Amnesiac are getting reissued together this fall. They’ll arrive with Kid Amnesiae, another LP of offcuts from the companion albums, which were recorded together during sessions spanning 1999 and 2000. The collection is out November 5 via XL. Listen to “If You Say the Word” and see the full Kid Amnesiae tracklist below. Plus, find the cover artwork for the triple-LP, titled Kid A Mnesia.

Kid A got a special collectors edition reissue in 2009. Last year, to mark the 20th anniversary of Kid A, Radiohead shared an extended version of the album track “Treefingers.”

In the years since 2016’s A Moon Shaped Pool, Radiohead members have stayed busy on projects of their own. Thom Yorke scored Luca Guadagnino’s film Suspiria in 2018, and in 2019, he released the solo album Anima. Jonny Greenwood scored Paul Thomas Anderson’s Phantom Thread, which earned him an Oscar nomination, as well as You Were Never Really Here. He’s also behind the scores for two new movies: the Princess Diana biopic Spencer and Jane Campion’s The Power of the Dog. Greenwood also launched Octatonic Records, a label focused on contemporary classical music.

Ed O’Brien released his debut solo album last year, Earth, under the name EOB. When Radiohead were inducted into the Rock & Roll Hall of Fame in 2019, O’Brien and Phil Selway showed up to the induction ceremony. David Byrne gave a speech in their honor. In 2017, the band reissued Kid A’s predecessor as OK Computer OKNOTOK 1997 2017.