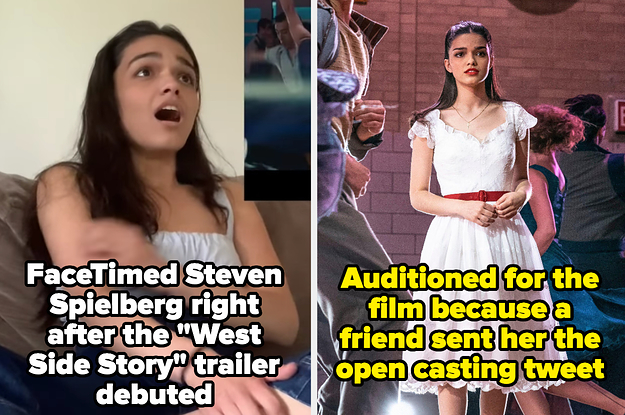 “I hope that young people everywhere will know that their features are gorgeous and their culture is beautiful.”

Something’s coming — and that something is finally the release of the new West Side Story film directed by Steven Spielberg. And when that happens, I can guarantee the entire world will be talking about the film’s ridiculously talented lead, 19-year-old Rachel Zegler.

Even though the film is releasing a full year late, Rachel has already made a major name for herself. From her unreal covers (seriously, her voice gives me chills!) to her Met Gala debut to her upcoming turn as a literal Disney princess in Snow White, Rachel is about to be absolutely everywhere.

So here are 15 facts about her that’ll make you love her even more:

1. At the age of 16, Rachel was cast in West Side Story (her first-ever movie role) after a friend sent her a tweet for an open casting call for the movie and said, “Thank me when you’re famous.”

2. Upon watching Rachel’s video, the West Side Story casting director Cindy Tolan told Town & Country she’d never heard someone sing Stephen Sondheim that way. For Rachel’s part, she hasn’t brought herself to watch the original audition tape since recording it.

3. At the time she landed the role of María, Rachel was planning to go to Montclair State University for college — a plan which ended up changing…of course.

4. And, once she was cast, Rachel still had an obligation playing Princess Fiona in her high school production of Shrek. She headed straight to rehearsals for the movie once the show closed.

5. Rachel has a thriving YouTube channel where she documents her life and shares both covers and original music — here she is reacting to seeing herself in the first teaser-trailer for West Side Story.

6. And, in what feels like a real pinch-me moment, Rachel FaceTimed with Steven Spielberg immediately after the trailer dropped:

7. Rachel has talked about how meaningful it is for her to play the role of María as a Latina woman — and the impact the film will have on the next generation.

8. Growing up, Rachel had a photo of Rita Moreno in her locker — now, of course, she worked opposite the legendary actor on-screen in West Side Story.

10. Since we are simply living in this wonderful Rachel-ssance time, she also will appear in Shazam: Fury of the Gods in a yet-to-be-disclosed role. 👀

11. You might recall this extremely viral tweet of Rachel singing “Shallow” and I just wanted to share it here again because I listened to it 400 times in a row, contributing my part to the over 11.8 million views on it.

12. On top of singing, Rachel is amazing at doing celebrity impressions — just after her casting as Maria was announced, she also went viral for her takes on everyone from AOC to Idina Menzel to Rachel Green.

15. And finally, I know this is turning into me just absolutely losing my mind over Rachel’s talent, but I haven’t been able to stop thinking of this incredibly joyful TikTok that came up on my FYP of Rachel covering “Astonishing” from Little Women with pianist Tyler Capa:

In conclusion, stan Rachel Zegler…and less than three months to go until West Side Story hits theaters on Dec. 10, 2021!