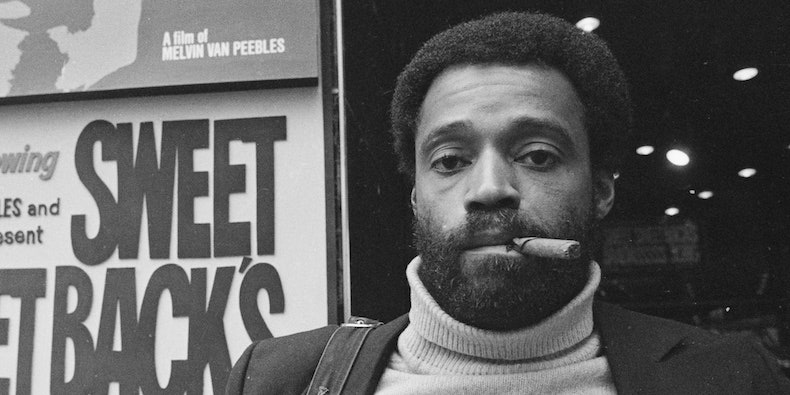 Melvin Van Peebles, the filmmaker, writer, and musician heralded as the Godfather of Black Cinema, has died at the age of 89, The Hollywood Reporter and Variety report. As THR points out, Van Peebles died Tuesday night (September 21), surrounded by family at his home. No cause of death was given. The Criterion Collection also posted a statement on their social media channels announcing the news. “We are saddened to announce the passing of a giant of American cinema, Melvin Van Peebles,” Criterion tweeted. “In an unparalleled career, Van Peebles made an indelible mark on the international cultural landscape. He will be deeply missed.”

Van Peebles is perhaps best known for his 1971 film Sweet Sweetback’s Baadasssss Song, in which he plays the titular character—a wrongfully accused ladies man on the run from racist cops. The film, as with many of Van Peebles works, was highly influential, and is considered a gem of the Blaxploitation genre. His body of work, including movies like The Story of a Three-Day Pass, Watermelon Man, and Don’t Play Us Cheap, went on to influence directors like Spike Lee, John Singleton, and Quentin Tarantino.

In addition to his own films, Van Peebles worked as an actor frequently throughout his career, appearing in Robert Atman’s O.C. and Stiggs, Jaws: The Revenge, Last Action Hero, and more. He pursued many creative endeavors, such as painting and writing plays, but Van Peebles was also deeply enmeshed with the music community. He composed the soundtrack to Sweet Sweetback’s Baadasssss Song, which was recorded by legendary group Earth, Wind & Fire. He also wrote and sang on the score for his previous film Watermelon Man, which featured slide guitar courtesy of Ry Cooder.

Van Peebles released a string of solo albums throughout the decades, and collaborated with a number of contemporary artists. In 2014, Van Peebles released The Last Transmission, a sprawling spoken word and jazz record with the Heliocentrics. Just last year, the filmmaker appeared in the visual for Standing on the Corner’s single “Angel.”