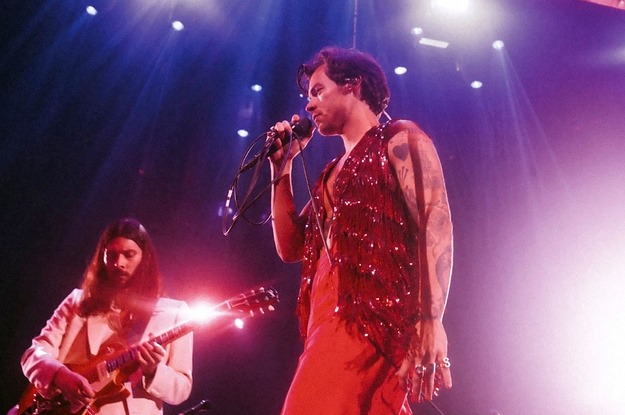 The singer returned to the stage with a signature move that involves shooting water into the air from his mouth like a whale.

Harry Styles‘ first concert tour in almost two years kicked off in Las Vegas over the weekend, when he performed tracks from his 2019 album Fine Line for thousands of fans at the city’s MGM Grand Garden Arena.

In addition to sharing music with the enormous crowd that attended his Vegas show on Saturday, Harry may have also shared some saliva, which many people found concerning given the ongoing spread of COVID-19.

Harry’s supporters are probably aware that one of the singer’s signature moves — popularly known as “the whale” — involves him taking sips of water and proceeding to spit into the air.

Some video footage that surfaced on Twitter after the concert showed Harry reviving “the whale” on stage during his set while concertgoers stood nearby, and tossing water from the bottle he’d just drank from into the audience.

And when Harry hopped on Twitter after the show to thank his fans, his mentions filled up with people calling him out for doing “the whale.”

After seeing the footage, tons of Twitter users pointed out that exposing a large indoor crowd to saliva is irresponsible and potentially dangerous, in light of COVID transmission risks.

Harry’s international concert series, “Love On Tour,” announced COVID safety protocols ahead of its recent debut. The rules require attendees to present negative PCR test results in order to gain entry to venues, and wear masks throughout the performances. But lots of photos surfaced online after Saturday’s concert that showed audience members without face masks.

If seems like there’s never been a better time for Harry to retire “the whale” than right right now. COVID-19 cases are currently on the rise across the United States. There are safety precautions that you can take in your everyday life to protect yourself and others from COVID: Get vaccinated, wear a mask, practice social distancing, and get tested regularly. Head to the CDC’s website for information about how to get a COVID-19 test in your state.

You can also visit the CDC’s website to learn more about how and where to get vaccinated in your state.